Is Snoring Bad For My Health? - Snorgo

Is Snoring Bad For My Health? 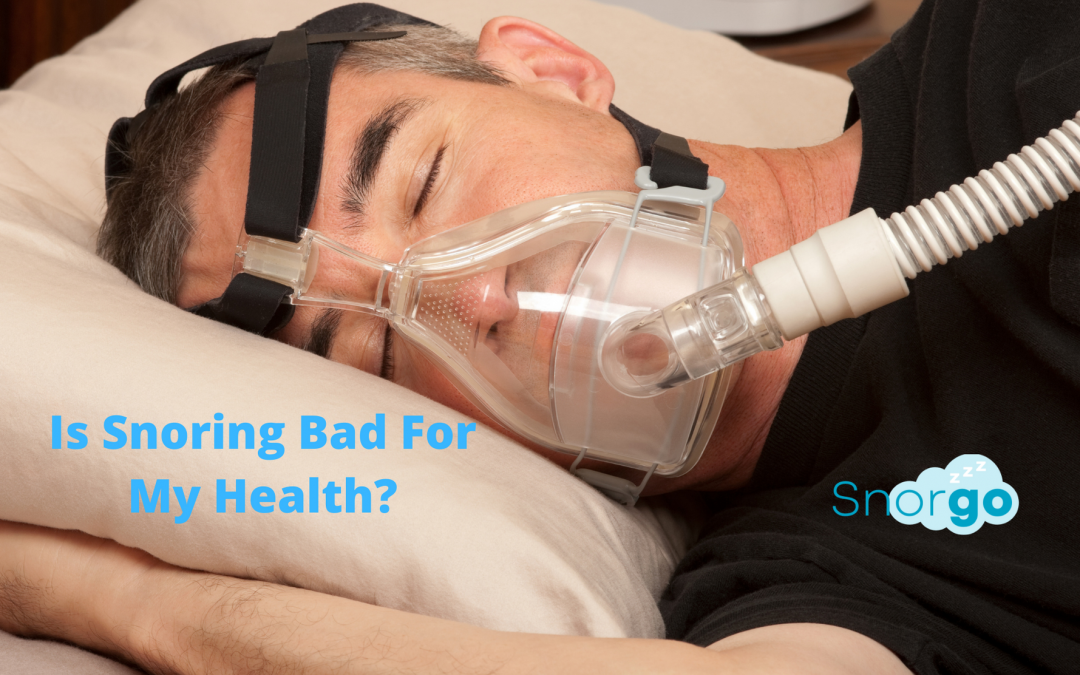 Is snoring bad for my health – In short, yes. Mild to moderate snoring will still disrupt sleep. This can be a cause of headaches, mild depression and an increase in accidents. Other health issues are linked too. Consider also that up to half of the people who report snoring could suffer from a condition called sleep apnoea. Then there are even greater concerns.

Snoring is caused by the vibration of relaxed tissue in your throat when you are breathing when asleep. Approximately 30-40% of adult males snore and 10-25% of women do too. It is so common that it is usually considered as nothing more than a mild irritant. However, the medical world has to consider it more than just that.

You may also be interested in the article, “How to Stop Snoring without Surgery“.

What is Sleep Apnoea then and why is it so dangerous?

Sleep apnoea is a condition resulting in pauses in breathing during sleep. One adopted definition defines the pauses as those longer than 10 seconds. It is more likely to occur if you are overweight. Also if you have been a long term (chronic) snorer. It is suspected that many sufferers of sleep apnoea are not aware of their condition. They are often blissfully unware of the health risk it poses to them.

Symptoms that are linked to sleep apnoea include:

When to seek help for your snoring.

If you suffer from any of these you might want to consider seeking help from your doctor for further investigation. Unlike snoring on its own, sleep apnoea is a medical condition and can have very severe consequences and is not to be taken lightly. The NHS website offers a list of when you should consider seeking a medical professional support with your snoring. This can be found here. We strongly suggest you follow this guide.

The DVLA request that you do NOT drive with sleep apnoea if you have any excessive sleepiness until symptoms are controlled. If the symptoms are considered ‘moderate’ or above this improvement must be confirmed by a sleep clinic. Even more concerning is that sleep apnoea is a potential direct risk to your health.

Just to be clear though – not all snorers will have sleep apnoea and in fact, not all sleep apnoea sufferer’s snore but the two are very strongly linked.

You may be interested in our article, “Can snoring cause neck pain?“

The direct health risks from sleep apnoea are significant and some are listed below:

High blood pressure (Hypertension) and sleep apnoea are definitely associated. There has been some struggle to work out exactly which causes which. What is not in doubt is that both conditions are linked. What is more, is that this combination is not a healthy one.

Habitual snorers are more likely to have high blood pressure. This is the case for both men and women. Roughly half of those with regular snoring will develop high blood pressure. This may be caused by an increase in the release of stress-related hormones. All this is potentially brought on by snoring. Both conditions are linked to an increased risk of non-fatal and fatal heart attacks and strokes. Those with hypertension have a roughly 30-50% chance of having sleep apnoea. Those with both are also more likely to a treatment resistance for their blood pressure. More recent work has suggested that snoring, even without sleep apnoea, may have an impact on cardiovascular disease.

The good news is that if people are treated for their sleep apnoea it seems also to have a positive effect on their hypertension.

CVD is the disease of the arteries that carry blood to the heart itself. The heart is a big muscle that pumps blood around the body. However, like any muscle, the heart itself needs a blood supply to the muscle tissue itself. Disease of those arteries is what causes angina (heart pain from a lack of oxygen).  A heart attack (myocardial infarction) is when the lack of oxygen is long enough and severe enough to kill off an area of heart muscle.

Heart attacks can obviously be fatal. Risk factors include hypertension, obesity and smoking. These last three things are all risks of causing snoring themselves, so you can see the spider’s web of interaction between all these factors. Note though, independent of that, sleep apnoea itself is another risk factor for CVD. All these factors should independently be addressed if you want to lower your risk of a heart attack.

Research at Yale University concluded that those who snore heavily are at 50% greater chance of contracting Type 2 Diabetes. This type of Diabetes is a further risk of heart attacks and strokes, which arguably further compounds the problems.

It isn’t too surprising that there is a link between snoring and weight. Being overweight increases the risk of snoring. Obstructive sleep apnoea may be as common as 45% in people who suffer obesity. The surprising fact is that studies have suggested that the reverse may be true. Snoring may have an adverse effect on your weight! This probably happens in more than one way. Small amounts of loss of sleep is enough to alter your body hormones. This may have an adverse effect on weight. In addition, people who feel more tired are more prone to reaching for sugary foods and drinks in an attempt to combat their tiredness.

Up to 50% of people referred for their snoring are reported to be suffering from depression and anxiety when reviewed with screening tests. The mechanism of this isn’t perfectly understood but poor sleep itself is very disruptive to individual’s mental health so it perhaps is not too surprising.

Links have been found between the disordered breathing produced by snoring and attention and short-term concentration. On-line headings have suggested a link to dementia but this link has not currently been demonstrated.

Asthma is a breathing condition that is often worse at night when our own protective steroid hormones are at their lowest. Whilst obstructive sleep apnoea is not thought to cause asthma directly it may well worsen the condition for sufferers by increasing inflammation in the airways and from the general stress response it can create.

Fibromyalgia is a very painful soft tissue pain disorder. It causes widespread discomfort and extreme fatigue in suffers. There does appear to be a link between obstructive sleep apnoea and fibromyalgia with a significant proportion of sufferers overlapping. However, the cause of this is not yet well understood.

Studies have shown that men who consistently snore and have obstructive sleep apnoea are more likely to have erectile dysfunction and a reduced libido (sex-drive). These studies have suggested that 69% of men with sleep apnoea have erectile dysfunction. Again, there is a lack of clarity as to why this is but it is known that testosterone levels can dip in those with sleep apnoea and oxygen levels are also lower. These two factors may combine to be causative.

There are also links between sleep apnoea and other important conditions such as Parkinson’s, thyroid problems and Gastroesophageal reflux (GORD or GERD).

Snorgo is a new device that aims to solve your snoring problems. It has been designed and developed in the UK. It has been supported by The Innovation Agency NW,  who are part of The Academic Health Science Networks (AHSNs). AHSNs are funded by the NHS in order to support organisations with promising future medical products. Initial independent research was further backed by a trial done with The Innovation Agency showing 75% felt solid improvement with their snoring with Snorgo, all were fully satisfied with the product and none could be convinced to give it back despite a financial incentive. At just £34.99 – get yours here.

Summary – Is Snoring Bad for my Health

This article has discussed the health issues associated with snoring. Whilst it is not a direct medical article it has described some of the issues around is snoring bad for my health? Our other articles will tell you more about how you can address your snoring.